keeping our heads down

Well, round 6 was very eventful.  we thought it would be smooth sailing to the end, but we were reminded, as always, that cancer and chemo are in charge, and it ain't over until it's over.  Round 6 actually went well -- it was our first outpatient experience.  We were in and out in about 6 hours, which was wonderful.  Andrew felt a little beat up, but not too bad for the next few days.  We were out in the garden planting, cleaning up, and having a great time.  Then day 8 hit him like a ton of bricks.  He was on the couch all day.  Day 9 he couldn't move from the bed and we knew he was struggling.  We decided to head to the doctor's early the following morning.  Andrew was back in the wheelchair, as he was unable to walk into the clinic.   I was trying not to panic, but it was so unexpected -- we thought we were beyond this point.  They drew his blood, while he rested in the infusion suite.

Dr. E. came right over to see us, and told us that all of Andrew's counts were near zero again -- critically low, and that he would have to be admitted for transfusion and antibiotics.  Andrew was not happy to hear this -- he has reached his emotional limit with hospitalization.  But we knew there was no choice -- his bone marrow has been so beaten up by the chemo that it's not yet functioning well on it's own.  Dr. E. told us that this is not unusual -- lymphoma patients are in and out of the hospital all the time, due to the aggressive nature of the treatment.    We waited around until the hospital had a bed for him.  That night, Andrew was given 2 units of red blood cells and round-the-clock antibiotics.  The next morning he was given 2 more units of RBC's, and his counts started creeping back up.  The following day, the on-call doc decided Andrew was well enough to be discharged.

So we have 2 more rounds to get through.  Most of us think "2 rounds -- hooray, no sweat, it's almost over!"  but for the person going through it, the last rounds are usually the hardest.  The body is just so weak by the end, that it's like glimpsing the top of a mountain and you're unsure if you have enough strength left to get there.  So keep your good wishes coming for the last 2.  We will all get him through this!!!

Andrew's platelets are not cooperating, so no chemo today.  :(   We're rescheduled for Monday -- hopefully  a restful weekend will help all the blood cells reach chemo safe levels.

Andrew had been feeling so well after round 5 that we decided to take a little "spring break" from cancer.  It was such a long and difficult fall and winter, that we really needed a respite from it all.  We decided to drive down to Washington D.C. to visit my sister, see the cherry blossoms, and show the boys the sights. 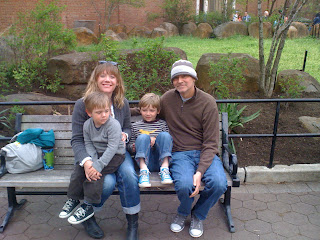 Andrew did have a few pretty rough days about a week after the chemo.  The neupogen injections gave him some terrible bone and muscular pain, and he was unable to sleep for 2 nights.  But after that, he was feeling really good.  We drove down to D.C. on a Friday night and stayed for 3 days.  We took the boys to the zoo, toured monuments, had a few dinners with friends, and searched in vain for cherry blossoms (early bloom this year).  Although it was wonderful and fun, we probably did too much.  Andrew was feeling poorly yesterday, and spent most of the day on the couch recouping his strength.  I guess we really wanted to pretend everything was back to normal and went overboard.  He's feeling better now and we're gearing up for round 6, which starts on the 6th.
Posted by Linda at 2:03 PM No comments: